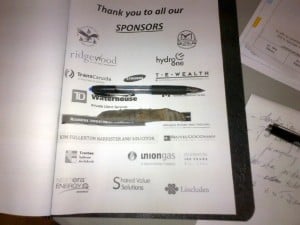 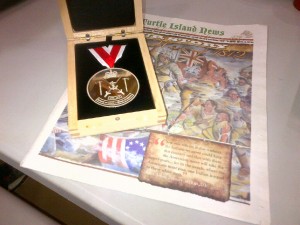 This week I spent a day at the 3rd Annual Historical & Cultural Gathering of the Mississaugas of the New Credit First Nation held February 13 to 15, 2013. Each year, the organizers bring to the community’s Lloyd S. King Elementary School, an engaging and informative list of guest speakers. The speakers cover a variety of subjects related to the Mississauga nations and their extensive traditional territory across the north shore of Lake Huron and across much of southern Ontario from the Thames River watershed to the Gananoque River.

I’ve started to look forward to this event and put it in my calendar long before it happens. I get to hear from some excellent story tellers, scientists, artists, archaeologists, historians and cultural heritage experts. I also get to have some great corn soup and good conversations. And, I learn a lot. It’s not every day I get to participate in a gathering of people passionate about sharing and delving deeper into their history while a room filled with young people engage with their elders and guests. It’s a special event.

Community members have served in British and Canadian military roles in the Revolutionary War, the War of 1812, the Boer War, World War I, World War II, the Korean War and in peacetime service. A highlight of last week’s event was hearing the stories of two of the forty Mississauga nation members who fought with the British during the War of 1812, including the Battle of York – now Toronto - in 2013. The 200th anniversary of that battle, and the role of the Mississaugas, will be commemorated in Toronto on April 27, 2013, lead by members of the Mississaugas of the New Credit.

At the Gathering, we also learned that the Mississaugas have a reputation for being “light on the land” leaving a very small environmental footprint. Historically a semi-nomadic people, they established no permanent villages. They spent winters at hunting grounds across most of Lake Ontario’s northern shoreline and watershed. During the spring they gathered maple sugar and in the summer months they fished at camps near the mouths of rivers. In the late summer, they harvested corn they had planted on the river banks in the spring.

For over 12,000 years, the watersheds around Lake Ontario have provided a home for First Nations people. A highlight of the day for me was when we passed around a 12,000 year old scraping/shaving tool found on the banks of the Credit River. It was humbling to watch the faces of kids from the Lloyd S. King Elementary School hold a tool that their ancestors held centuries ago, at about the same time the Oak Ridges Moraine was formed, during the last ice age.

The Mississauga nations are still “light on the land” and quietly make use of their traditional territory for hunting, fishing, harvesting food and traditional medicines, for spiritual and ceremonial purposes and for social and economic development. While history is very important, understanding the extent of the current use of traditional lands by the Mississauga nations is also important. This is especially true for our understanding the potential impact of various infrastructure and construction projects across the Golden Horseshoe and beyond. It was good to hear some of those stories too.

There are many, many stories to hear and be told, by historians, archaeologists, elders and youth. It’s a living history. As I drove home from the event, I thought about the kids at the event and how they are part of a tradition of creating and telling new stories about the Mississauga nations, every day, across their traditional territory.

Shared Value Solutions Ltd. is one of the first 100 B Corporations in Canada.  We bring the best environmental peer review, strategic advice, community engagement and traditional knowledge, land use, and socio-economic research expertise to address your challenges and opportunities.  Working with leading companies, civil society, Aboriginal communities and government organizations, we drive shared value solutions.