Energy East Pipeline to Nova Scotia: Will First Nations Have a Big Say? 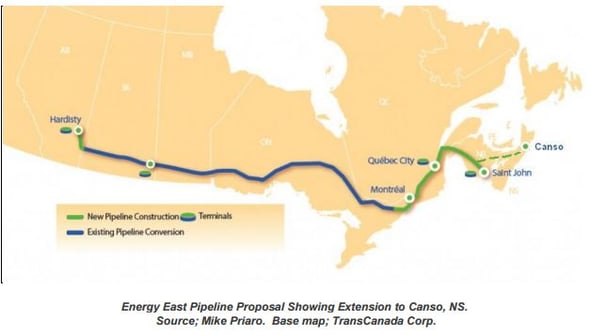 I was taken by surprise by the announcement that Nova Scotia's Strait of Canso Superport should be an ultimate destination for the Energy East pipeline.  That's the recommendation of a new Senate Committee report released on December 7th, 2016.  The report also highlights the Indigenous partnering, including benefit sharing and equity stakes, that the Senate Committee says are critical for any Canadian oil transportation strategy.

At Shared Value Solutions we provide environmental and regulatory consulting support for several First Nation clients across New Brunswick, Prince Edward Island and Nova Scotia.  This new report from the Senate Committee on Transport and Communications has big implications for our clients, and will lead to important community decisions.  And it is part of a constantly changing and complex political story that is Energy East.

Part of my job, which I couldn't do without my terrific colleagues, is to support Indigenous leaders and their communities, in getting the facts, conducting independent due diligence including land use and Indigenous knowledge studies, and making informed community decisions.

The Senate report, is largely supportive of Canadian oil and gas energy production policies and should be read with that understanding.  It is titled Pipelines for Oil: Protecting our economy, respecting our environment and makes 6 key points about a proposal to direct the Energy East oil pipeline to a new port in Nova Scotia.  Let's see what this means...

We've been following Energy East closely with Indigenous leaders and their legal advisors since 2013 (see previous posts including notes on TransCanada Energy East and First Nations).  Bringing the Energy East oil pipeline to Nova Scotia would mean another big change for the Energy East proposal.

This massive project proposal requires a lot of attention from Indigenous leaders who are along the path, and have responsibilities to make good decisions about how to engage with Canada, provincial governments, and TransCanada to advance community rights and interests.  I found it interesting that the Senate Committee’s recommendations were released on the same day the Assembly of First Nations was debating the benefits and drawbacks of pipelines during its special chiefs assembly in Gatineau, Quebec.

The Senate Committee's proposal is unapologetically based on a "made in Canada" energy approach.  In the Committee's eyes, directing the Energy East oil pipeline to Nova Scotia's Strait of Canso Superport is an obvious conclusion.  Others, including TransCanada which has not commented on the idea, may disagree.

The Committee's report includes six key points that will need to be more thoroughly studied by those who might be impacted by the Committee's proposals:

1. Concern: Lack of participation from Nova Scotia in Energy East

5. Reduced Impacts: Senate Committee says impact of oil tanker traffic on the Bay of Fundy ecosystem will be reduced

In short, the Senate Committee recommends "that the National Energy Board, as part of its hearings on the proposed Energy East project, examine the Strait of Canso area as an alternative end point of the pipeline."

For people already participating in the Energy East hearing process, this is a big new recommendation from a multi-party government committee with some clout.  Reacting to the report, Robin Tress, Atlantic organizer for the Council of Canadians said, “The senate committee completely failed to think outside of the box of fossil fuel... They had an entire committee committed to think about ways to get more oil through more pipelines, rather than think about how to get away from fossil fuels. We all know we need to do that, it is only a matter of time.”

The big question about this major new recommendation is:

What will the National Energy Board Panel will do with the Nova Scotia route alternative in their hearing process?

The Nova Scotia route would result in new impacts and a whole new set of interested parties and First Nations getting engaged between parts of New Brunswick and into Nova Scotia, possibly as far as Halifax/Dartmouth.

When the new Panel for Energy East finally assembles following the previous Panel stepping down in September 2016 due to accusations of bias, the Panel will no doubt look carefully at its obligations and the Senate Committee's Nova Scotia recommendation.  The Panel will likely do what they are obligated to do, and consider the Energy East pipeline to Nova Scotia alternative in a careful and precautionary manner.  An alternative like the Nova Scotia route, with characteristics that might avoid significant adverse environmental effects, and tabled by a multi-party Senate Committee, will be something they will have to seriously consider.

If the National Energy Board Panel for Energy East determines that this alternative is technically and economically feasible, then the Panel may require Energy East to analyze this alternative, including consultation, Indigenous community engagement, and application of Indigenous knowledge.  The Panel will ultimately determine if this is route alternative should be brought forward for additional detailed effects assessment and additional scrutiny in the hearing process.

It is now likely that the Maritimes, the Bay of Fundy and the Straits of Canso will become focal points for Energy East in the next few months.  Stay tuned, and...

We are a B Corp and we bring the best engineering, design, environment, architecture and other technical discipline expertise to address your challenges and opportunities: