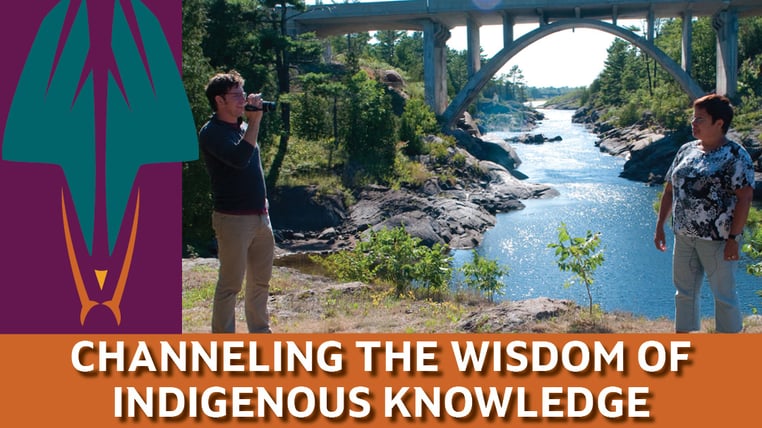 Welcome to another blog post from our popular eBook, "Channeling the Wisdom of Indigenous Knowledge."  Click below to download the book that explores ways Indigenous Nations have used Indigenous Knowledge Studies (also called Traditional Knowledge or Land Use and Occupancy Studies) to assert jurisdiction, leverage influence in regulatory processes and Impact Benefit Agreement (IBA) negotiations, further stewardship and cultural revitalization efforts, and to build capacity:

In this post, we learn about the benefits of a Traditional Land use study and how using video to gather and transmit Traditional Knowledge brings study results to life in a way that speaks powerfully to regulators and proponents, but most importantly, back to the community itself.

When the Lands and Resources staff at Magnetawan First Nation set out to conduct their first traditional land use study back in 2012, they had two main goals. The first was to help the Ontario Ministry of Transportation (MTO) incorporate their traditional knowledge into the environmental planning for the Highway 69 widening north of Parry Sound, Ontario, in a way that was respectful of Magnetawan First Nation interests and culture. The second goal was to help community members, particularly Elders, preserve and share knowledge of how they use the land for their way of life with youth and with future generations.

When the team decided to film all of the interviews and turn the results into a feature length video, they helped achieve both of those goals – in unexpected ways. What they didn’t anticipate was the astonishing and profound effect the movie would have on their relationship with the MTO - and on the community itself.

We've embedded some of the chapters of the videos in this post. All are available on YouTube. Here's Chapter 1:

The Fogo Process at Work

“I never knew that everyone felt the same way about the land as I did – until now.”
– Veronica Noganosh, Magnetawan Elder

When the community gathered for the movie’s premier one snowy night some months after the study’s conclusion, everyone from little kids to Elders sat together, eating popcorn and watching themselves on the big screen. They laughed together at the spear fishing demo (the fishers speared a flashlight lost in the last spring’s harvest). They watched the epic canoe journey upstream past sets of rapids many in the audience had never had the chance to visit. They heard the voices of Elders speaking about the ways they have seen the environment change over their lifetimes, and of the cultural values that define them.

That night in that room, the community came together in a spirit of pride and love of the land that connects them. Some years later, a council member took us aside and said with a laugh, “You know, whenever we meet as a community, we say we’re only going to watch one chapter. Then we always end up watching the whole thing.”

Magnetawan’s movie experience is part of a tradition of community video making that has its roots in the 1960s, in a small fishing community off the coast of Newfoundland, called Fogo Island. The legendary community filmmaking project, now known worldwide as the Fogo Process, started as a National Film Board “Challenge for Change” program that used film to promote community collaboration and social change. The island had been under threat of clearance, the population facing a move to the mainland. Not until the community watched itself on the screen did everyone get the full picture of what was possible for their future, and what was at stake. The project galvanized the community into solving its problems, together. Fifty years later, that community is still on Fogo Island – and thriving.

Anyone who has been part of negotiations between resource developers, regulators and Indigenous Nations knows that the atmosphere can be less than open and friendly. Negotiations with the MTO around the widening of Highway 69 – the third time a highway was planned to dissect the reserve land, and only the first time the nation was being consulted – were slow. Everyone was holding their cards close. The mapping results of the Traditional Knowledge study provided powerful input into the planning process. But what we want to highlight here is how Magnetawan’s movie influenced the tone of the negotiations and opened the door of collaboration at least a bit wider.

“As my first Traditional Knowledge/Traditional Land Use Study, this study for Magnetawan sets the bar quite high for future undertakings,” an environmental planner at the MTO commented after watching the video. “I found the use of video and the visit to important places/traditions in the community to be a unique and irreplaceable component of the study that I am sure will be a legacy for the community.”

Off the record, she went on to say that the video had given her team a much better sense of the people at the table, of who they were and what they cared about. That understanding helped the team move closer to a plan that everyone could get behind.

Passing on the Knowledge

Many of the Elders in Magnetawan’s movie have passed away in the years since its debut, taking their stories and their wisdom with them. Those oral history interviews from 2012 have become precious resources for future generations. Their experiences provide a window into a world where living off the land in traditional ways was still completely possible. One of the products of the study was a set of DVDs, one for each complete interview, housed and available in the community library. The families of each interviewee were also given copies.

The story of Magnetawan’s movie would not be complete without a shout-out to the community researcher, Cynthia Paul, and the two youth reps, Samantha Noganosh and Brock Lewis. Brock, a gifted drummer and singer, contributed his talents to the movie soundtrack. He also taught the SVS team to better understand and appreciate the music he loves (now we love it, too!). Cynthia was able to explore the lands and waters in a new way: canoeing up the Magnetawan to Miner’s Lake was a highlight for us all.

And then there’s Sam. Back in 2012, Sam was a youth rep getting her feet wet working with Anthony Laforge in the Lands and Resources department, and with the SVS team helping conduct the study. She got video cameras into the hands of youth so they could share their perspectives. She helped with the interviewing and the mapping. And, when we heard she was a songwriter, we helped Sam professionally record a song she wrote just for the movie. She’s singing it in the introduction! Now in 2019, Sam is the Lands Clerk at Magnetawan, and sits on Council. Sometimes the results of Traditional Knowledge studies can be entirely unexpected – in great ways!

The key take-home point is this: Using video to gather and transmit traditional knowledge brings study results to life in a way that speaks powerfully to regulators and proponents, but most importantly, back to the community itself.

"Channeling the Wisdom of Indigenous Knowledge" is a celebration of the extraordinary nations and visionary leaders we have had the privilege of working with on Indigenous Knowledge studies from coast to coast, to coast - with some resources and ideas for you to use in your own journeys. We hope you join us for the rest of the ride.  And please get in touch if there’s a topic you’d like us to explore.

If you know you need help with any aspect of your study or are trying to figure out how to get started, do give us a shout. We’d be happy to discuss your options and help you weigh the pros and cons of your approach. We’re a team of social researchers who love to talk about this stuff, so don’t hesitate to get in touch.