Six Nations of the Grand River just set a precedent for Indigenous jurisdiction and National Energy Board (NEB) regulated pipelines in Canada.  And it's a BIG ONE. The precedent will have implications for ALL Indigenous communities seeking to exercise jurisdiction through environmental and cultural heritage monitoring of currently operating oil and gas pipelines across Canada.  This will have major implications for National Energy Board pipeline projects like Energy East and for potential Aboriginal and industry partnerships for monitoring work where approvals are already in place for existing pipelines.

As we like to say, "SHIFT HAPPENS": our experience suggests that Indigenous environmental monitoring simply makes operating infrastructure projects better for all parties.  We follow pipeline regulations very closely for several Indigenous clients, and we've reported on previous precedents like the Enbridge decision on the Enbridge Gas GTA project.  In that project, our work with the Mississaugas of the New Credit set important precedents - those precedents resulted in Aboriginal environmental and cultural heritage monitors being present at one of the largest pipeline related archaeological discoveries in Ontario.

The NEB approved Enbridge’s Line 10 Westover Segment Replacement Project on January 26, 2017.  Line 10 was built in 1962 and is one of several Enbridge Great Lakes pipelines that crosses major Great Lakes rivers and waterways.  Line 10 crosses the Niagara River, while Enbridge Line 5 crosses the Straits of Mackinac and the St. Clair River near Sarnia. Enbridge Line 9 crosses the Thames River upstream from the Chippewas of the Thames and crosses the Grand River, and then crosses every major river on the north shore of Lake Ontario before crossing the Ottawa River. Enbridge Line 9 is subject to a major Supreme Court of Canada case brought by the Chippewas of the Thames focused on the Crown’s duty to consult and accommodate Aboriginal peoples.

These pipeline river and waterway crossings are of great importance to Indigenous communities. The Hamilton-Niagara region is criss-crossed by more than a dozen pipelines, several of them more than a half-century old.  There are so many and, so many unknowns, that the City of Hamilton recently formed a task force to uncover answers and to assess pipeline issues that arise across the region

The Line 10 project proposes to replace 32 km of 12 inch Line 10 pipe with 35 km of new 20 inch pipe from the Enbridge Line 9 pipeline to the pipeline junction where Line 10 connects with Enbridge Line 11 to the Imperial Oil Nanticoke refinery.  At this "Nanticoke Junction" connection, Line 10 continues on through the Niagara Peninsula and crosses the Niagara River, just above Niagara Falls at the historic First Nation portage crossing and village area near Chippawa.

Enbridge's 60 year old Line 5 Pipeline under the Straits of Mackinac. Line 10 is of similar vintage and crosses under the Niagara River upstream from Niagara Falls at the historic First Nation portage crossing and village at Chippawa (Photo via Detroit Free Press) 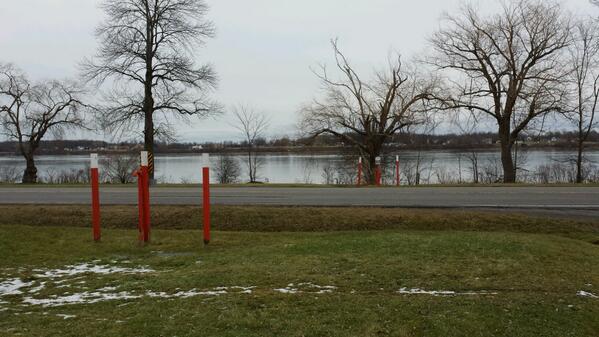 Enbridge Line 10 crosses the Niagara River here, at the historic First Nation portage crossing and village at Chippawa - also the site of a major War of 1812 battle where First Nations fought with the British and local residents against the Americans. (Photo via www.line9communities.com )

The Line 10 project is linked to a deal that Enbridge struck with U.S. oil refiner United Refining in 2014.  United Refining operates a 70,000 barrel per day refinery on the banks of the Allegheny River in Warren, Pennsylvania.  According to the NEB, United Refining processes 100 percent heavy crude oil from western Canada via Line 10, which has a maximum capacity of 74,000 barrels per day within the Enbridge Alberta to Great Lakes Mainline system.  The NEB predicts a need to expand Line 10, with future volumes expected to increase.  The United - Enbridge deal calls for replacement and upgrade of additional portions of Line 10 beyond the current Westover Segment Replacement Project, likely in the Niagara Peninsula.  Details on any replacement work on the Line 10 pipeline segment that crosses the Niagara River above Niagara Falls are not available.

Six Nations is concerned about potential impacts of the Line 10 project on watercourse crossings, and impacts wildlife and wildlife habitat, vegetation, effects resulting from spills, and impacts on fish and fish habitat, which could also impact Six Nations’ ability to practice its traditional activities. Six Nations also raised specific concerns about the Project’s potential impact on the harvesting of traditional plants, including those with medicinal properties.  Six Nations had been negotiating with Enbridge for nearly two years to reach an agreement on the corporation's Line 10 Westover segment replacement project, but according to news reports, the talks did not go well and Six Nations elected council withdrew its consultation and accommodation process team on Sept. 12, 2016.

Six Nations decided to participate in the NEB hearing on the Line 10 project - Six Nations was the only Aboriginal group to do so.  At the hearing, Six Nations presented evidence and requested imposing a conditions relating to an investigation of deer habitat and medicinal plants and requiring a plan for participation in construction and postconstruction monitoring for traditional uses or treaty uses that may be of concern to Six Nations.

Line 10 crosses the Niagara River just upstream from Niagara Falls, and transports western Canadian heavy crude to this refinery on the banks of the Allegheny River in Warren, Pennsylvania.

The NEB approved Enbridge's Line 10 project, saying: "Having considered the evidence, the NEB believes the project is in the public interest and has imposed a total of 46 conditions covering a wide range of matters, including emergency management and environmental protection."  These conditions include reference to Six Nations views on those conditions. The decision also notes that Six Nations stated that consultation has been insufficient and that Six Nations’ treaty rights have not been investigated and assessed appropriately or sufficiently.
The NEB says that through Condition number 25, "Enbridge can effectively continue to consult with Aboriginal groups in order to learn more about their interests and concerns, and to address issues that they may raise throughout the lifecycle of the Project." (page 74 of the Reasons for Decision).
Condition number 25 of the NEB decision is where Six Nations set a precedent for Indigenous jurisdiction and National Energy Board (NEB) regulated pipelines in Canada.  The condition calls for a "Post-Construction Aboriginal Monitoring Plan".  Within 90 days of getting an order from the NEB allowing Enbridge to open the pipeline to ship oil, Enbridge must file a plan with the Board "describing participation by Aboriginal groups in monitoring activities durnig the operation of the pipeline.  This plan must include a list of potentially affected Aboriginal groups, including Six Nations, that have reached agreement with Enbridge to participate in monitoring activities. The use of the word agreement is important.
If Six Nations reaches agreement with Enbridge on participating in monitoring activities, that agreement will likely need to include the scope, methodology, and justification for monitoring activities to be undertaken by Enbridge, including geographic locations that will involve Aboriginal monitors.  Enbridge will also have to provide the NEB with a description of how it will use information gathered through the participation of Aboriginal monitors and how it will provide information gained through the participation of Aboriginal monitors back to the participating Aboriginal groups.

Why is the Six Nations Condition for Monitoring During Pipeline Operation Important?

There have been recent conditions requiring Aboriginal monitoring during pipeline construction, but we've scanned the NEB records and cannot find an example like this one.  The fact that the NEB is seeking  the names of Indigenous groups with which it has reached agreement with Enbridge to participate in monitoring activities means that there are likely to be some important pipeline operations monitoring agreements to be negotiated in the near future.  Given the history of the previous Six Nations negotiations with Enbridge, the NEB is imposing a big challenge on a First Nation that is coming to the table with important regulatory leverage.

The First Nations claim TransCanada must consult about significant operations and maintenance work on a 30-kilometre stretch of the TransCanada Mainline pipeline - part of the pipeline that TransCanada seeks to convert to oil for Energy East of pipelines.  Like Line 10, the TransCanada Mainline has been in place since the late 50s / early 60s.  And like Six Nations, Aroland and Ginoogaming argue that not consulting with First Nations on pipeline operations work undermines an established principle of requiring companies to consult about industrial projects that go through traditional aboriginal lands and may cause impacts on the environment, harvesting, and cultural heritage.  “Neither (TransCanada Pipelines) nor the NEB (National Energy Board) nor Canada, even admit that a duty to consult and accommodate under the Constitution is owed,” Raymond Ferris, a spokesman for the First Nations.

There are several likely scenarios:

SPECIAL NOTE: As part of the scope of the NEB Modernization Review, the Panel that includes two First Nation Panel members, will be looking at legislative tools for lifecycle regulation of pipelines and other NEB regulated facilities.  This includes looking at "lifecycle oversight" and safety and emergency preparedness tools, effective compliance monitoring and enforcement legislative tools, safety standards and emergency response requirements.  There is a fit between this part of the NEB Modernization Review and Indigenous community needs and requirements for agreements with facility proponents for consultation and accommodation throughout the lifecycle of projects.  We encourage Indigenous communities to consider submitting comments to the NEB Modernization Review Panel with this in mind.  If you need assistance, please email us at the email address below.

You can read the full NEB decision on the Line 10 project here:   Conditions 12 and 25, requiring Enbridge to file with the Board plans describing participation by Aboriginal groups in monitoring activities during the construction and operation of the pipeline, respectively.

We are a B Corp and we bring the best engineering, design, environment, architecture and other technical discipline expertise to address your challenges and opportunities: