Chief Sonny Gagnon, Aroland First Nation - a community that will be impacted by the proposed pipeline project - speaks at the signing of the historic Regional Framework Agreement signed by Matawa-member First Nations and the Province of Ontario

Note: This is one of a series of posts we're providing on the TransCanada Energy East Project and related oil & gas pipeline infastructure and Aboriginal interests.  Other posts include:

The Ontario Energy Board conducted community discussions in the spring of 2014, inviting sixty First Nation and Métis communities and organizations to participate in Community Discussion meetings and/or provide written comments to assist the Province of Ontario to formulate the province’s position as an Intervenor in the National Energy Board’s regulatory process for Energy East.  The resulting Ontario Energy Board report on First Nation and Métis discussions is illuminating.  Some excerpts from that report: 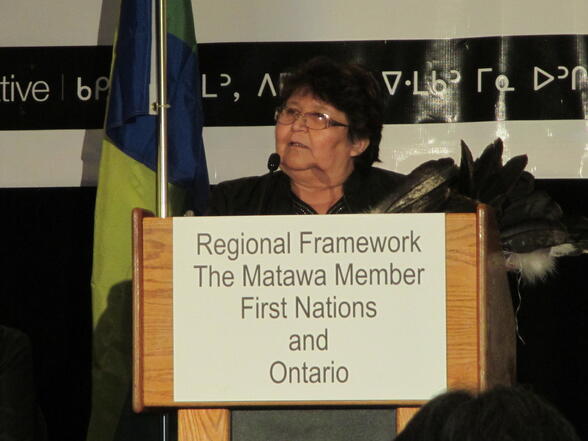 Chief Celia Echum, Ginoogaming First Nation- a community that will be impacted by the proposed pipeline project - speaks at the signing of the historic Regional Framework Agreement signed by Matawa-member First Nations and the Province of Ontario

Keep watching our blog posts on TransCanada Energy East.  We'll continue to post about key Aboriginal interests, including traditional land use studies, indigenous knowledge, aboriginal economic development, traditional land use and occupancy mapping, environmental assessment peer review, aboriginal-private sector business partnerships, and other topics related to oil and gas pipeline projects: follow us on Twitter at @SharedValueCA, follow us on Facebook at www.facebook.com/SharedValueSolutions and follow us on LinkedIN - https://www.linkedin.com/company/shared-value-solutions-ltd-

Shared Value Solutions Ltd. is one of the first 100 B Corporations in Canada.  We bring the best environmental peer review, strategic advice, community engagement and traditional knowledge, land use, and socio-economic research expertise to address your challenges and opportunities.  Working with leading companies, civil society, Aboriginal communities and government organizations, we drive shared value solutions.