Filling in the Blanks: How to Show Cumulative Effects in Indigenous Knowledge Studies 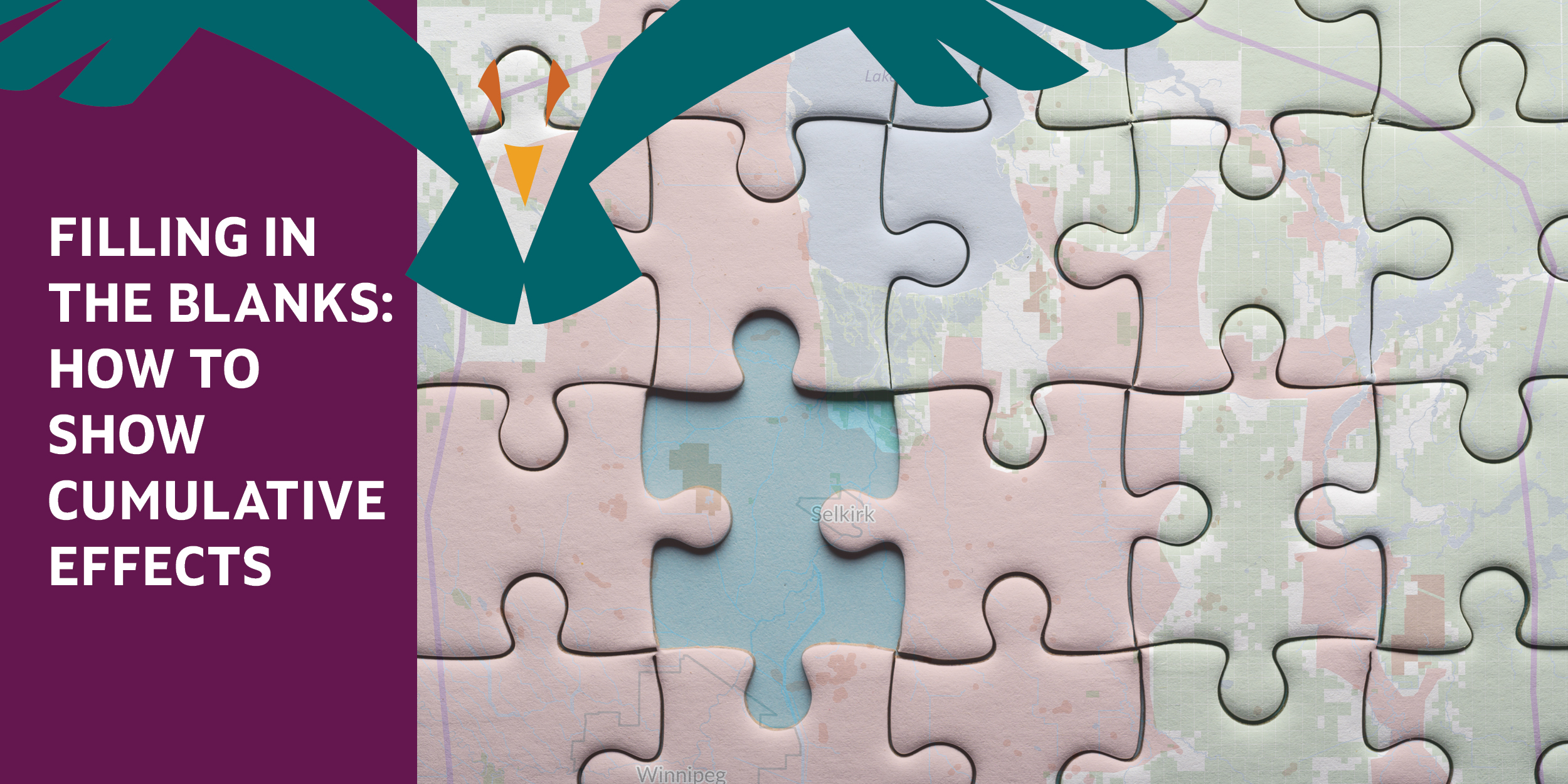 Often when we work with an Indigenous Nation to collect and display Indigenous Knowledge data on a map, defined shapes appear where there is no data at all. Like missing puzzle pieces in an otherwise rich picture of land use, these blanks on the map clearly tell the story of past and ongoing development projects that have forever changed the ability of our clients to exercise their Indigenous Rights.

Mine sites, hydro corridors, military installations, waste treatment plants, and nuclear development all leave their footprints on the land and sometimes in the waters. These “footprints” in turn affect hunting, trapping, fishing, gathering patterns, and other land-based activities. The cumulative effects of decades, sometimes centuries, of development on Indigenous ways of life are significant.

The missing puzzle piece in the shape of an army base

When Lynn Clouthier, a member of the Algonquins of Ontario, first saw the land use map from a recent Algonquin Land Use and Occupancy Study, what immediately drew her attention was the distinct outline of Canadian Forces Base Petawawa – the only spot in the area where Algonquins were not reporting land use. “To see this illustrated by the mapping had an interesting impact on me. I had not joined these pieces together,” says Lynn. “That picture did indeed tell a story.”

Although the military base was established in 1905, Algonquin harvesters had access to the land, including the Petawawa River and the lakes draining into it, into the 1950s and beyond. “I recall that one summer my family camped at Montgomery Lake for the whole summer while Dad came and went from work,” Lynn remembers. “As the “Camp,” as it was called, became a more developed military base, it began to be more restricted (and more dangerous). Eventually those areas were not used in the traditional way.”

The same century also saw the establishment of Algonquin Park, which removed Algonquins from another significant portion of their Traditional Territory. “Many stories are told about my grandfather’s brother who had tales about outwitting the game wardens in the Park and facing charges,” Lynn comments. Add the Petawawa Forest Research Station in 1918, and then the Nuclear Station in the 1940s and 50s along with countless other smaller developments, and the land available for harvesting has shrunk considerably.

“These four government institutions doubtlessly contributed, and still do, to the wellbeing of the people in the Upper Ottawa Valley,” Lynn reflects. “However, the land they occupy has not been used by Algonquins. By now, 2020, the people who told those stories in my childhood are gone. Their actual use and knowledge of the land around the Petawawa River is lost. While descendants now have more access to Algonquin Park as part of their Aboriginal Rights, they have never used the land on the military base and, if they could, the landscape has been forever changed by its use as a military training area.”

Only very recently in this painful history of loss and alienation from the land has the Impact Assessment Agency of Canada legislated that proposed project impact assessments “must include consideration of cumulative effects to rights of Indigenous peoples and cultures” (Impact Assessment Agency of Canada, 2020). How those effects are “considered” is an issue of hot debate and has been met with considerable skepticism. Stay tuned for a future blog on that prickly topic.

What we’re focusing on in this blog is how to make sure your Indigenous Knowledge studies effectively capture the history of changes to your land use and occupancy over time so that you can make a clear and powerful argument as to how the next proposed development project may affect your lands and your lives.

Welcome to the latest post in our Indigenous Knowledge Matters blog series. Read on for two approaches to gathering evidence of cumulative effects: the “data diamond” interview approach to reporting changes on the land and “lands taken up” mapping.

Show the story of cumulative effects: “Lands taken up” mapping

Usually, Indigenous Knowledge studies focus on people’s connections to land, and use maps to demonstrate the extent of those connections – often showing harvesting sites, trails, overnight locations, gathering locations, and more. What these studies don’t always ask about or show are the areas on the land people are not using and why.

Consider creating a “lands taken up” map to create a high-impact visual showing all the existing development in the area - and consequently, the already-limited land available for current land use activities. By creating this type of map, you can very effectively demonstrate that lack of land use in an area may not necessarily be because of a lack of interest. An area may be so heavily impacted and fragmented by existing resource development that accessing the land for traditional land use activities may not even be an option.

You can make this kind of map using publicly accessible data. All you need is someone with some GIS mapping savvy to pull the information into a map that speaks volumes. Below, as an example, we created a “lands taken up map” for a land area in Manitoba. For reference, the red areas on the map demonstrate development or exclusion areas. The green demonstrates Crown land or wildlife management areas.

It is one thing to try to explain this in writing. It is another to see the evidence so blatantly on a map.  Visuals are so impactful and meaningful. Building a map that shows the changing land use over time is a very effective tool to demonstrate how cumulative effects influence where and how people are using the land. 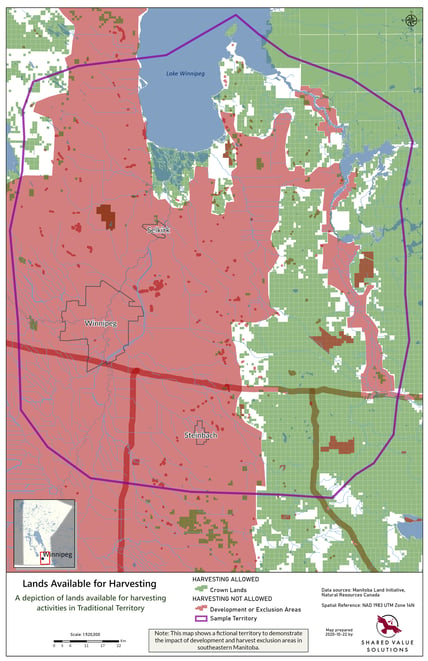 When you gather land use and occupancy data, your methods need to be rigorous and credible so that they are legally defensible and can hold weight in the regulatory process. The “data diamond,” a method pioneered by Terry Tobias (Living Proof 2009), is considered best practice in Traditional Knowledge studies for ensuring an adequate level of descriptive precision and accuracy on a map when capturing land use data.

The concept of the data diamond is that any event is made up of four related facts:

The idea is that each feature captured on a map should include descriptive data of each point of the diamond to ensure you are gathering “the facts.” For example, if you are recording an activity such as a moose harvesting site on a map, you would make sure to record who shot the moose, where it was harvested, and when, which is often recorded in a time period, such as “within the past five years.”

You can use the same data diamond approach to document how your Nation’s territories have changed over time and why. Documenting these changes will help communicate and provide evidence of cumulative effects:

Documenting changes to the land

When asking questions about changes to the landscape and territories and/or community members’ land-based activities, the more specific you can get, the better! For instance, if wetlands are changing, how so? What other ripple effect changes have you seen because of wetlands changing? If the evidence you are gathering stays broad and general, regulators and project proponents will most likely overlook or dismiss it. If you get really specific and gather data according to the data diamond approach, you are better able to start establishing causation for change and demonstrating the “full picture” of impacts your Nation has been experiencing over time – not just the anticipated impacts of one project being studied.

Upping the game with the methodology on cumulative effects will help to ensure your data has more weight in the regulatory process as well in negotiations with proponents for impact benefit agreement, mutual benefit agreements or other similar agreements that aim to acknowledge and address the impacts your Nation will experience as a result of a project, in combination with the historical legacy of existing impacts.

A caution that the phrase “cumulative effects” is pretty jargony and likely won’t help orient your participants to the information you are after. Instead of asking about “cumulative effects” they have observed on the land, ask them instead where they have noticed changes to the land. The word changes may be more suitable as it is broad and it is accessible language for all people and ages. And be specific with your questions. Instead of just asking “have you noticed changes to the land?” Ask, as a follow up question, “have you noticed any changes to wetlands, to animals, to water?”

Documenting changes to land use activities over time

The same logic holds true for changes to land use activities because of a direct loss of access due to past development projects. Follow the data diamond approach to get specific:

For example, finding out that a certain lake where someone used to fish regularly is now off limits because it is part of a military installation (and you might be shot if you ventured past the fence! True story!) paints a pretty clear picture of the continued effects of past development.

The role of oral history interviews, photos, and video

There is a place for stories like Lynn’s in a Nation’s narrative of cumulative effects. Asking participants for stories they have heard of past land use in areas that are now inaccessible or forever changed by development add texture and understanding to the picture the maps paint.

In addition to maps, photos of your territories have the most powerful influence in helping outsiders understand the implications and realities of the changes your Nation has experienced. Providing photos of when the land was pristine and vibrant, contrasted by more recent photos of the land’s fragmented state – development, logging, pollution, gated fencing preventing access to traditional harvesting sites, for example, really bring home the point beyond words and charts.

Tell it like it is: Frame your argument with the story of cumulative impacts

Indigenous Knowledge studies are powerful tools to demonstrate how proposed projects have the potential to forever change your ability to use the lands and water. When a crucial element of your Nation’s relationship to the land is the story of where this relationship has been destroyed, consider beginning your argument not with where people are using the land, but with where they no longer can, and why. This powerful flip side of the land use coin can provide you with the evidence you need to assert your rights and interests in the face of the potential impacts of the next proposed project in your territory.

This series is a celebration of the extraordinary Nations and visionary leaders we have had the privilege of working with on Indigenous Knowledge studies from coast, to coast, to coast - with some resources and ideas for you to use in your own journeys. We hope you join us for the rest of the ride.  And please get in touch if there’s a topic you’d like us to explore.

Read other posts in this series:

If you know you need help with any aspect of your study, or are trying to figure out how to get started, do give us a shout. We’d be happy to discuss your options and help you weigh the pros and cons of your approach. We’re a team of social researchers who love to talk about this stuff, so don’t hesitate to get in touch.