“Working in lands is the foundation of our community”

Our #wcw this month may be young, but she is mighty. At 29, Samantha Noganosh already has several years under her belt working in the lands department and on her Nation’s council.

We first met Sam back in 2012, when she was a youth rep getting her feet wet helping our team conduct 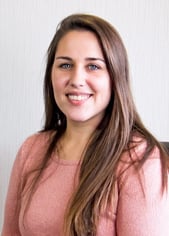 a Traditional Land Use and Knowledge Study (Magnetawan Makes a Movie: Gathering Traditional Knowledge in the Digital Age). We have been fans of this vibrant, passionate, and committed woman ever since, and have been delighted to watch her journey unfold!

The young people, the future of the community, look up to Sam for guidance. Her message to them? Keep at it.

Magnetawan First Nation, where Sam is currently the Lands Manager, is a tightknit Ojibwe First Nation with about 120 residents. The “Mag,” as it is affectionately called by its residents, is situated close to the mouth of the beautiful Magnetawan River, which flows into Georgian Bay south of Sudbury, Ontario. The Nation considers the mighty river to be the life blood of their existence. The river falls under Sam and her team’s watchful eye. It is a delicate system that is now threatened by climate change, which makes its care even more crucial. Hear Sam discuss the challenges facing the river and the community on its banks due to flooding and drought in this short film about Magnetawan’s flood mapping project.

Growing up in Magnetawan, Sam developed a love for the river, the surrounding land, and her community. She earned her diploma from Georgian College in Aboriginal and Community Social Development, and during that first summer of college, she worked in the lands and economic department in the community. In school, she got a taste of the inner workings of the legal system as a court worker assistant for the Barrie Native Friendship Centre. Through that experience, she learned about First Nations advocacy in the court system and the criminal justice system. Armed with experience and knowledge, Sam returned to her community. After that, she never looked back.

Upon graduation in 2013, Sam started working at the lands department. Two years later, she welcomed her son Lennox into her life, adding “Mother” to her growing list of titles. Two years passed, and again, Sam’s responsibilities mounted when she was called on by her community to run for Council. Although Sam was busy working at the Lands Department and raising her young son, she heard the needs of her community and accepted. She was voted in by majority to the Council and became the Deputy Chief.

This was a busy time in Sam’s life, but also a time of learning and growth. Sam had the privilege to learn not only from the Lands Advisory Resource Center and Advisory Board, but also under the lands manager at the time, Anthony Laforge, who became her mentor. 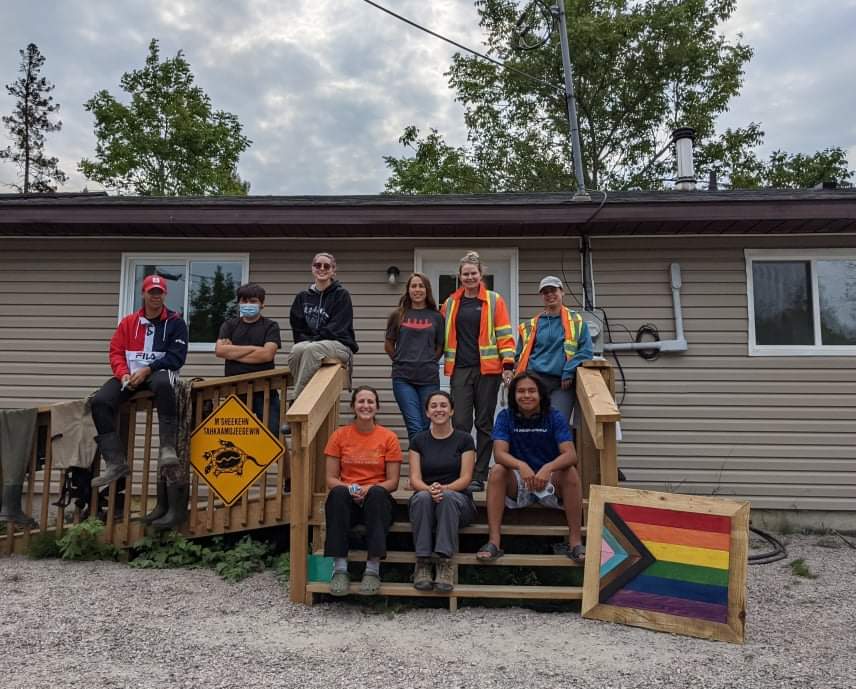 “With knowledge, comes passion,” Sam says about how her role in the community grew.

Working for the Lands Department and being a member of council, Sam had the opportunity to deal with community issues at a deep level. During her first term on Council, Magnetawan’s neighbors, Henvey Inlet First Nation created a wind farm, and the transmission line for their wind farm would be coming through Magnetewan’s Territory. This project was an opportunity for Sam to use her knowledge and influence in many ways. She conducted technical work, such as reptile surveys and environmental assessment reviews, as well as leading lease and budget negotiations. This experience gave her a new take on the issues that affect her community and how her knowledge and experience could make an impact.

Two years and many learning experiences later, Sam got voted onto council as the Deputy Chief for a second time and continued her work serving her community. By the time a third election came up, Sam decided that her passion was working for the lands department and wanted to maintain her focus there. Of her time on council, Sam says she gained experience and knowledge not for herself, but in service of her community. She feels her duty now is to share that knowledge and passion and to empower other people to try to want to make change too.

Sam is especially passionate about the Species at Risk Program, a passion that she and her son share. In particular, the turtle monitoring program that they run is near and dear to her heart. 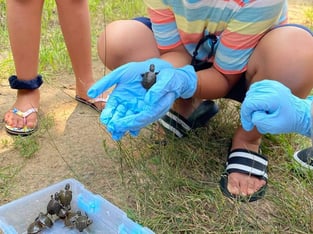 The program is special to Sam because it involves community members, including youth, in the protection of threatened species. They incubate turtle eggs, hatch them, and then release them. Sam loves to see the smiling faces of the kids when they do their releases. “It’s awesome,” says Sam.

The young people, the future of the community, look up to Sam for guidance. Her message to them? Keep at it. She says that they face many obstacles: climate change, difficulties with knowledge sharing and inequalities at the government level. The youth get discouraged and feel they are taking one step forward, two steps back. Sam is there to remind them to keep it up, for the sake of their community and for Mother Earth. 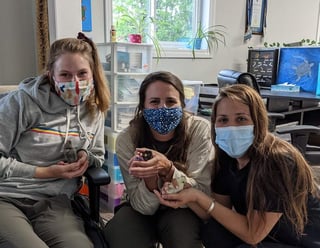 How does Sam keep going, in the face of these obstacles? What drives her every day? Sam says, it’s her son, Lennox:

“Each one of us has a footprint that we will leave behind, and I hope that by teaching him how to care for our earth that he'll leave less of a footprint. I have high hopes for him that conservation will be in his future, or at least in his heart.”

Sam’s story continues, and more schooling and learning are on the horizon for her. She hopes to continue her studies and has interests in so many areas, from law to biology. She is acutely aware of how her knowledge will transfer right back into the development and growth of her community and is excited to see where she can continue to give back and continue protecting the land and community that she is deeply connected to.

Last but not least, back in 2012 when we met Sam, she revealed she was also a songwriter! When SVS’s Jeremy Shute (who happens to be a professional musician) heard she had ideas for the soundtrack of the Traditional Land Use and Knowledge movie we were creating from the study at the time, he got his musician friends together to help record one of Sam’s songs. Here she is singing that song:

SharedValueSolutions · Take Over the Night

We are so inspired by all of what Sam has already accomplished and look forward to hearing what she gets up to next!

Like what you're reading? Our WCW campaign is named for the women it features. The women we profile are at the forefront of their fields, all while balancing home life and the challenges of 21st century politics, environment, and reconciliation. And they are – quite frankly – crushing it. See some of our prior #wcw posts here: Erin Knight, Cheyenna Campbell,  Kaitlin LIttlechild